Getting to Tanzania is Half the Battle

So I finally arrived in Tanzania after a variety of mishaps.
Here is the story(beware its a bit lengthy):
I guess medical emergencies on planes are a thing  and so they had to happen on my flight to Amsterdam from Boston. In fact, 2 happened. The plane had to land in Newfoundland for the first passenger-on the upside, I know know where that is (east part of Canada)! The second person happened close to landing- but still . . . 2?

I feel really bad for both people but they did indirectly contribute to my freak out in Amsterdam when I found I had missed my flight by 2 hours. Luckily I had made a friend with a Kenyan-American who was my neighbor for the flight. I also made a friend in Amsterdam with a lady who was heading to Tanzania as well for a solo Safari trip. We made an unlikely trio but stuck together the whole day exploring the airport. Now you may say "Lael, that sounds like a fun exploration!".

BUT. . .
1) The internet was iffy and extremely annoying- it was also  my only form of communication to the outside world.
2)This delay prevented me from sleeping for over 24 hours- its hard to sleep on planes and in airports
3) Delta only compensated me 10 euros--> thats like a sandwich.
4)Amsterdam airport was under construction - It is large but currently very stark and unwelcoming

Nevertheless, problems bring people together and it was nice to have people to hang with. The Kenyan also told me lots of stories of Africa and some Swahili! Looking back now it was not as big a deal as I made it.
I ended up taking a flight to Nairobi, Kenya and then a short flight to Kilimanjaro airport. Kenyan air was decent- I had a good seat with leg room and they fed me---->what more could a college student want other than internet access?
When I got to Kenya, the airport was pretty big but they had frequent power outages so there was some confusion to what gate my next flight was at. All in all, it cost me a bit more money (International phone call and money at airport) but I got to my program. I will follow with a post about my new host family and my first impressions of Tanzania later but internet is not a constant here so I better post when I can.
Here are some photos of my journey:

Picture from Window of Nairobi Airport 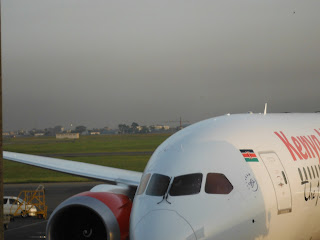 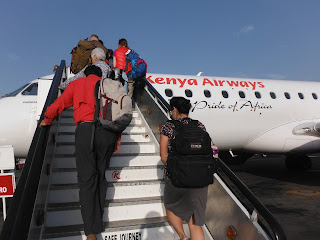 Picture from Sky over Tanzania: not sure the mountain(not kilimanjaro) 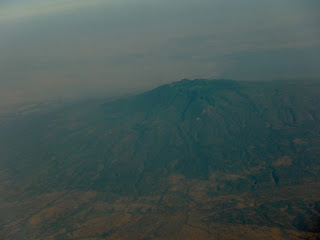 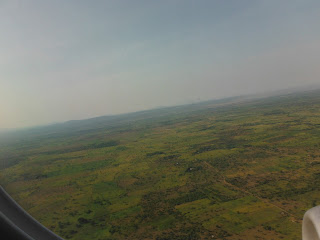 Picture of grounds of the school where I am learning Swahili and Engineering principals. 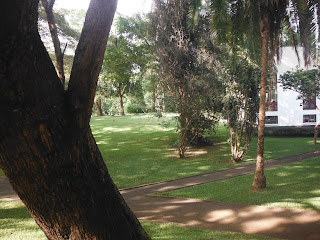 Picture of our daily classroom and the other students 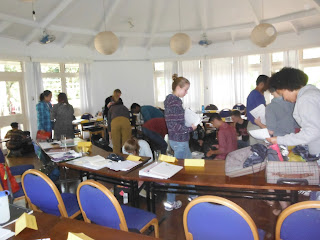